Click Here to Read my September Plant of the Month Column – Nasturtiums: Great for the Garden and Table

Why are certain plants popular with gardeners and others not? It is a pattern that I have always found interesting. Currently, one of the popular trends that will hopefully become the norm is adding native plants to the garden. These plants are beneficial for sustaining both the adult and the larval forms of our local insect populations. In addition, plants that provide color, height and texture during the summer months have also become very popular. Culver’s Root, botanically known as Veronicastrum virginicum has all of these virtues, yet for some mysterious reason, it has yet to gain recognition within the gardening community. 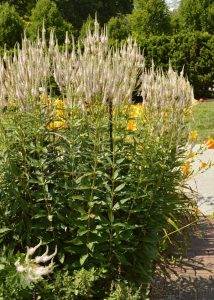 Culver’s Root is one of approximately 20 species of Veronicastrum found throughout North America, Europe and Asia. A member of the Plantain Family or Plantaginaeae, this species is native to open forests, meadows, grassy mountain slopes and prairies from Ontario south to Georgia and Louisiana. It was originally collected by the Reverend and Naturalist John Banister (1654-1692) soon after he moved to Virginia in 1679 and was initially named Veronica virginica in 1753 by the Swedish botanist Carl Linnaeus (1707-1778). It was not until 1917 that the Herbarium curator and drug inspector for Park, Davis and Company, Oliver Atkins Farwell (1867-1944) assigned the proper genus name. Interestingly, the name Veronicastrum was not new to the world of plants, as it was originally penned in 1759 by the German botanist and surgeon Philipp Conrad Fabricius (1714-1774). Obviously, it incorporates the genus name of Veronica, which was initially crafted by Linnaeus in 1753. According to Christian faith, St. Veronica gave her veil to Jesus to wipe the sweat from his face as he carried the cross to Calvary. Evidently, some species of Veronica have markings on the leaf that resemble St. Veronica’s veil. Astrum is Latin for Star, indicating that Veronicastrum resembles or shines like Veronica! The species epithet honors the location of its discovery by John Banister. The common name pays tribute to Dr. Culver, a physician in the early Eighteenth Century who supposedly recommended the root for medicinal uses. Interestingly, there does not appear to be a record of Dr. Culver’s life, indicating the use of the root by the doctor may be more of a myth than fact! 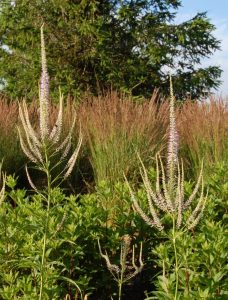 The apparent absence of Veronicastrum in many Gardens is by no means due to its lack of physical stature, since the plant typically reaches 5-7’ tall with a spread of 2-3’. The stout stems have whorls of 5, 6 or 7 leaves at nodes every 6-8” along the stem. Each leaf is upwards of 7” long! This leaf arrangement provides numerous horizontal lines in the Garden (as seen above right with Veronicastrum virginicum ‘Roseum’), which can be successfully used to pull the horizontal lines of architecture out into the Garden. If the plants are massed in a meadow-like setting, the whirls of foliage creates an almost psychedelic effect on the eyes! Come late June and throughout July, the tips of the stems yield 6-12” long spike-like racemes of white or bluish white flowers. The central spike typically has one to several whirls of smaller, subtending flower spikes that appear from the lower leaf nodes, as seen at left. These lower spikes help to enhance the display while providing a royal ‘crown-like’ appearance. The individual flowers appear in vertical rows along the stems. Each outwardly oriented flower is cup shaped, consisting of 4 fused petals. They are approximately ⅛” in diameter by ¼” long. The brown tipped anthers extend an additional ¼” beyond the flower, resulting in an airy or lacey effect for the flower spikes as seen below. The stems can be pinched back in mid to late May if a more compact plant is desired. Pinching the plants also delays flowering time by several weeks, but otherwise does not alter the overall appearance. If a light lavender flowered form is desired, consider ‘Lavender Towers’ (pictured above) or ‘Fascination’. ‘Cupid’ is a new selection whose flowers are a much darker lavender with blue highlights. Certainly one to look for in the years to come!

Culver’s Root needs full sun and soils that do not dry out in order for it to thrive its best. With its tall stature, it is traditionally placed towards the back of a border. However, since it possesses a very upright or columnar habit, it can also be placed towards the front of a border, where it enhances the visual depth to a border; the act of having to look past or around the plant to view the balance of the border makes the garden appear larger. 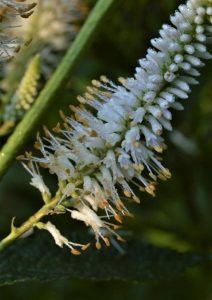 It also looks fantastic worked in with some of the mid-sized ornamental grasses, such as Karl Foerster Feather Reed Grass (Calamagrostis x acutiflora ‘Karl Foerster’), since the flowers appear to float above the top of the grasses. Plus, the upright, spiky composition of the Culver’s Root is repeated with the Feather Reed Grass, creating a very dynamic, vertical composition. You might consider working Culver’s Root with Rodger’s Bottlebrush Buckeye (Aesculus parviflora var. serotina ‘Rodgers’) or Summersweet (Clethra alnifolia). The image at left features the straight species of Bottlebrush Buckeye in the backdrop, which blooms several weeks earlier. Rodger’s Buckeye and Summersweet are July blooming shrubs with long upright racemes of white flowers, echoing those of Veronicastrum. 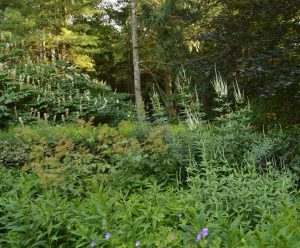 The repetition of the flower shape and color brings great unity and cohesion to the Garden! Culver’s Root remains attractive well into winter, since the frosted stems add attractive forms to the fall and winter Garden composition, as seen below in October with Agastache ‘Purple Haze’ and Calamagrostis. I have yet to see the plant self-sow when left standing through winter and subsequently cut the plants back in early to mid-March.

For a plant that has a long history with gardeners, starting with John Banister in the late 1600’s, it seems odd for this plant to not be a garden favorite. With the regal crown-like floral display combined with its many other attributes, it only seems natural for this plant to have far better recognition in the gardening community. Perhaps it’s time to start the Culver’s Root fan club? 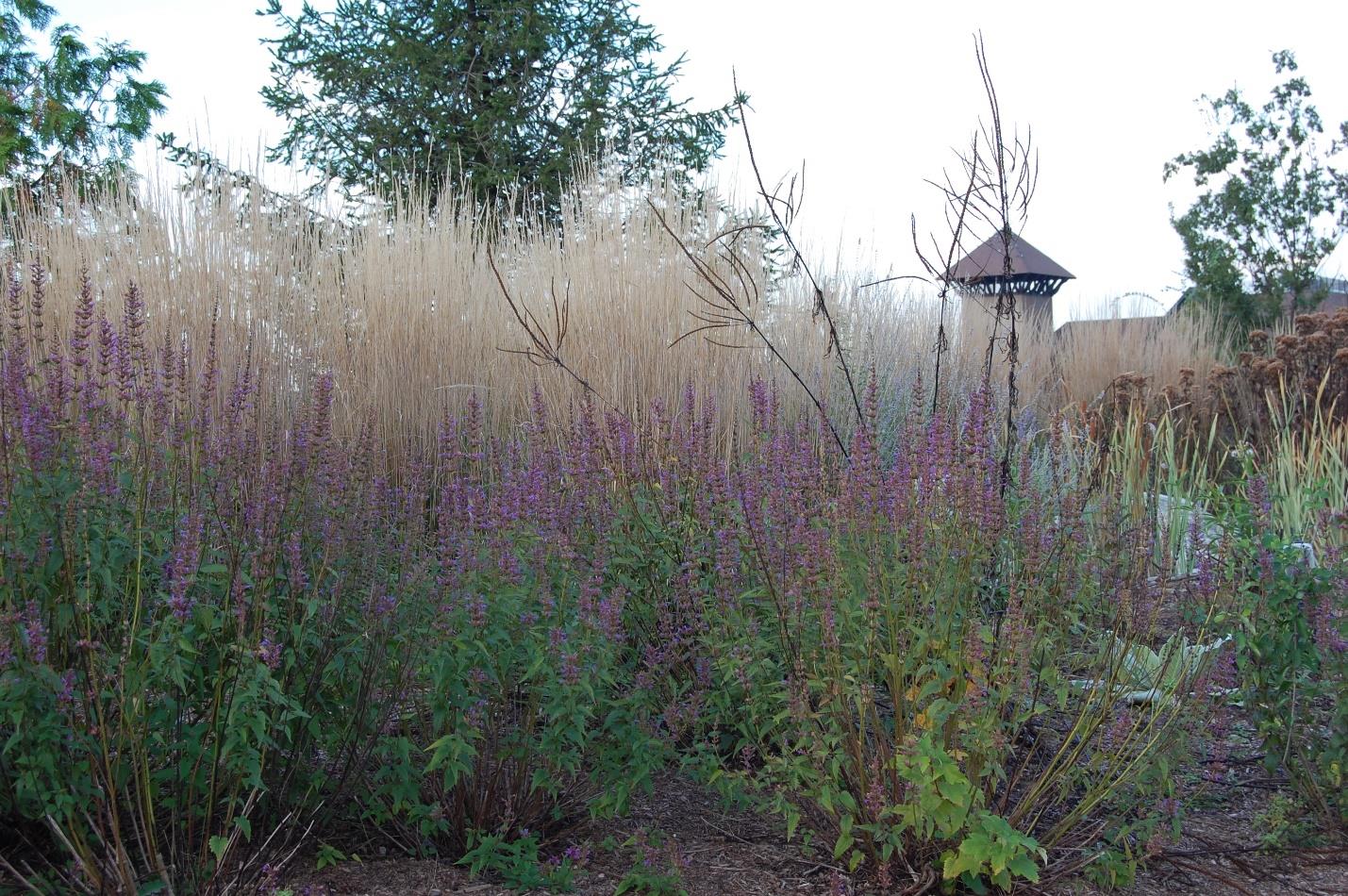 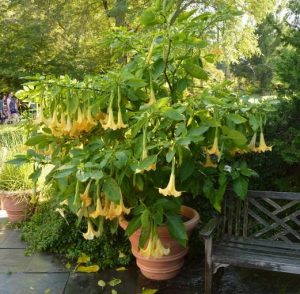 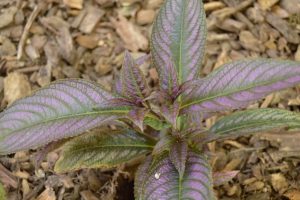 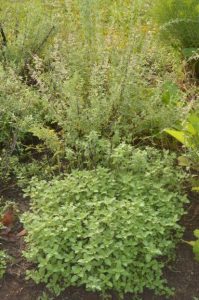 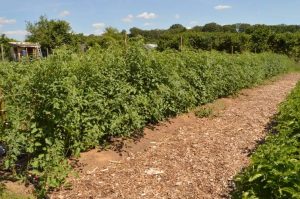 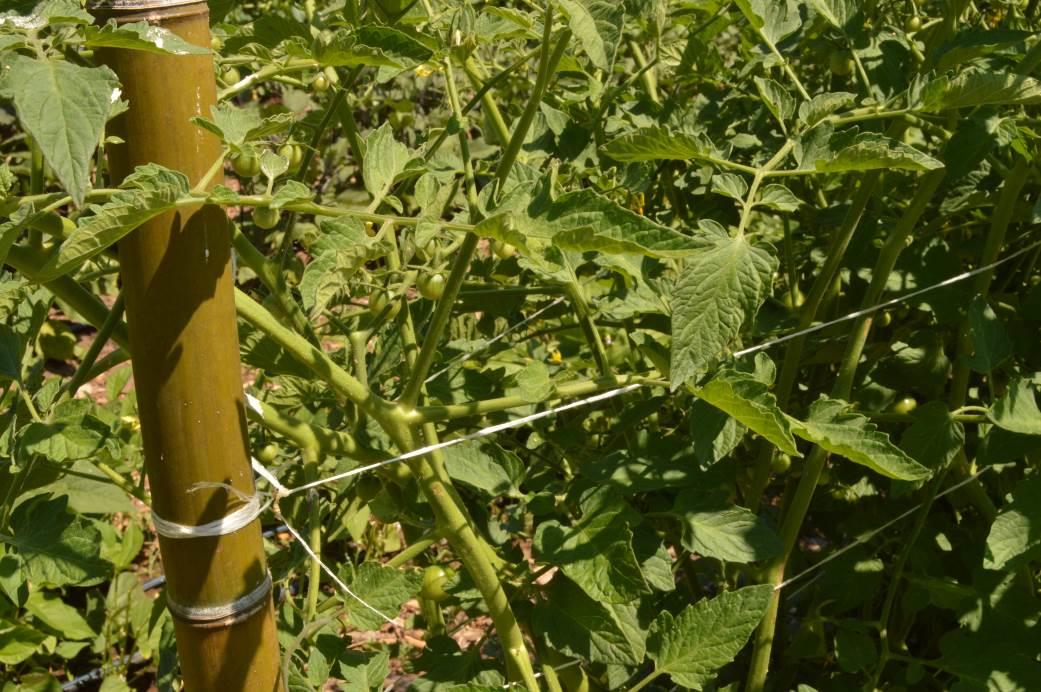