With its short days and cold temperatures, January is a good month to turn your focus to indoor gardening and expand upon your houseplant palate. It is a wonderful way to bring the garden indoors, so to speak. However, simply because the plant is labelled as a houseplant does not mean it cannot go outside come next summer! Haworthiopsis is a succulent that my mother propagated and distributed throughout the house and summer garden with great abandon, but it never garnered much of my attention. Having now ‘inherited’ all of these plants, I have come to discover its beauty, along with its wonderful care free nature!

Haworthiopsis was originally described and placed under the genus Aloe by Carl Linnaeus (1707-1778) in 1753 and was classified within the Liliaceae or Lily Family. It has recently been relocated under the Asphodelaceae or King’s Spear Family. The genus name was changed from Aloe to Haworthia in 1809 by the French physician and botanist Henri August Duval (1777-1814). The genus name honors the English 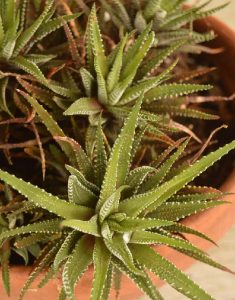 botanist and entomologist Adrian Hardy Haworth (1767-1833) who described 21 species of the genus throughout his career, although he too classified them as Aloe! In 2013, based upon genetic studies, the British botanist Gordon Douglas Rowley (1921-2019) split the genus creating the new genus of Haworthiopsis. The new ending for the name is from the Greek Ópsis for appearance, indicating these plants appear like Haworthia. The most noticeable physical difference is the thicker and harder epidermis or outer covering of the Haworthiopsis leaf when compared to Haworthia. Both Haworthia and Haworthiopsis are native to countries in the southern regions of Africa with the predominance of species found in South Africa, although Mozambique, Swaziland and Namibia are also home to numerous species. Both genera exhibit CAM or Crassulacean Acid Metabolism whereby the leaf stomata open only at night to reduce the loss of water during the day and allow for gas exchange. This allows the plant to be very efficient at conserving water, but also rather slow growing since it can only produce a limited amount of sugars per day based upon the amount of CO2 absorbed at night. 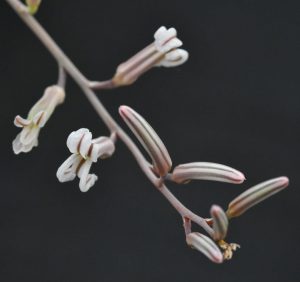 The most commonly grown species, and the plant my mother used with seemingly reckless abandon is the Zebra Cactus or Haworthiopsis attenuata (pictured at right). The species epithet is from the Latin Attenuatus meaning diminished or lessened and refers to the form of the leaf, which tapers or diminishes to a sharp point. The common name of Zebra Cactus comes from the ornamental bands of small white warty projections called tubercles on the back sides of the dark green leaves, which with a touch of imagination resemble the markings of a Zebra. The tubercles allow the expansion of the leaf during the moister summer months without imparting any tearing or damage to the stiff epidermis of the leaf. The plants are stemless and produce 3-6” diameter rosettes of foliage that develop offsets or pups over time and eventually develop into sizable colonies. White to soft pink flowers are occasionally produced during late fall and winter, which corresponds to the spring and summer months in the plants native homeland. The genetic clock does not change simply because the plants are now in North America! The flowers are located along slender stems that bend like fishing poles under the weight of the flowers. The flowers actually consist of tepals, whereby the petals and the leafy calyx look identical and they are displayed in a bilobate arrangement, with a very distinguished upper and lower lip, as seen above. The tip of the lips reflex back, giving the flower a very pronounce appearance similar to a set of puckered lips. Green or reddish brown stripes run down the inside and outside of the flower and most likely serve as nectar guides or visual cues for visiting pollinators. 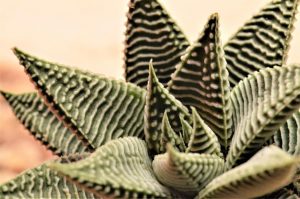 Another very ornamental species is Haworthiopsis limifolia, commonly called the File Leafed Haworthia or Fairies Washboard. Herman Wilhelm Rudolf Marloth (1855-1931), a German born South African botanist and pharmacist, described the species in 1910, under the genus Haworthia. The epithet is from the Latin limo, meaning to diminish or file off, a reference to file-like appearance of the raised linear ridges of tubercles along the leaves. The common name of Fairies Washboard is also a reference to the raised ridges of tubercles. The leaves are arranged in stemless rosettes, although they are slightly broader, especially near the base when compared to its previously mentioned cousin. ‘Spider White’ (pictured above) is a relatively recent introduction with very white tubercles and is the recipient of the 2015 Dutch ‘Glass Tulip’ award for best new houseplant. The tubercles are a very showy white and give the foliage a very attractive creamy glow!

Not all the species form rosettes of foliage, as some have stems reaching up to several inches long. Haworthiopsis coarctata bears a central stem that grows to nearly 8” long with tightly clasping leaves appearing radially around the stem. The species was initially described by Haworth himself in 1824 and the epithet is from the Latin for crowded or close together, describing the densely overlapping nature of the foliage. The tubercles appear as linear dots along the length of the leaf and are not as distinctive as in the previous two species. In shade, the foliage is a dark green, although the foliage often turns to purplish-red in full sun, as seen in the image below at Chanticleer Garden. Interestingly, this species is the type species for the genus, although it looks quite different from those forms that create rosettes.

Haworthiopsis species are exceptionally easy plants to grow, providing you do not equate weekly watering with proper plant care! During the 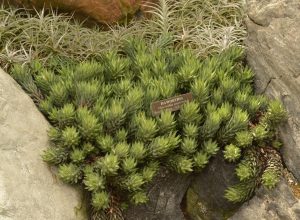 summer months, the plants are actively growing and are tolerant of our summer rainfalls, allowing them to be used in summer container arrangements or simply set outside for the summer. In the regions where they are native, they typically grow in the shadow of a rock and prefer a similar, lightly shaded location as an ornamental. Fertilize with a half dilute houseplant food that has a higher phosphorus content, such as 5-10-5. Come fall bring the plants inside and give them a windowsill with bright light or morning light. The key in winter is to let the soil dry out completely in-between watering, which can mean upwards of 2-4 weeks without the need for a watering can – something that may prove very difficult for some gardeners!

As you enjoy the warmth of your home this January, hopefully planning additions to your outdoor garden for 2021, it is always nice to enjoy and add some new houseplants to your indoor garden. There are many plants that ask for so very little, yet provide interest and joy throughout the season. Haworthiopsis is one such genus that will continue to provide joy not only throughout the year, but from one generation to the next! 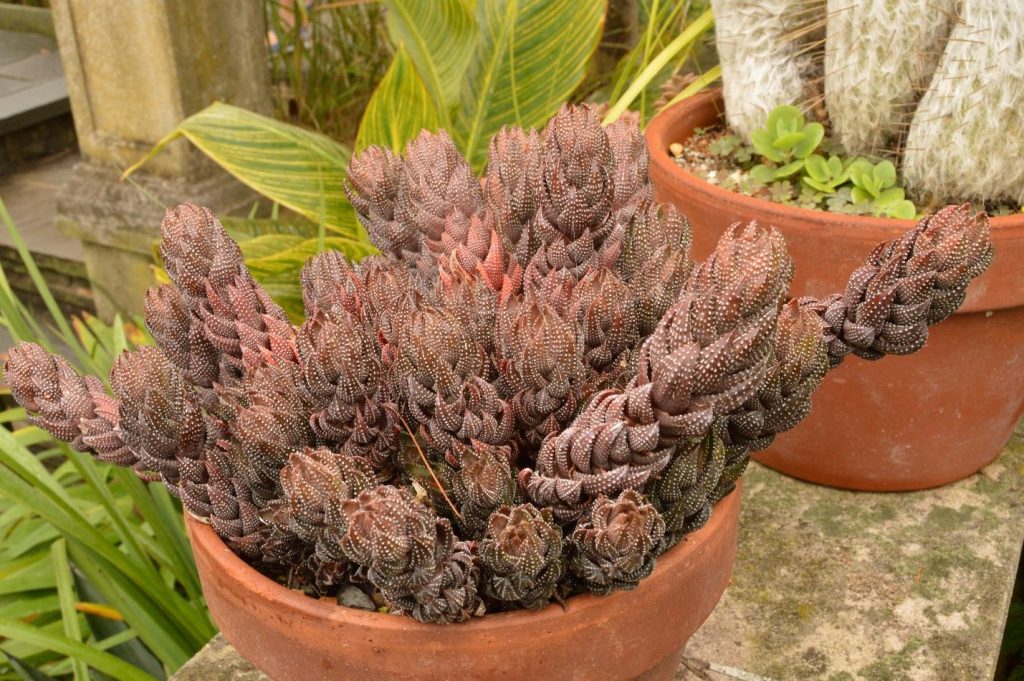