October is the month that truly evokes autumn. The temperatures are starting to cool, the foliage has started its autumn symphony of colors and many of the summer annuals are now looking tired. This is the time when gardeners truly need a new plant palette for late season color. Although Salvia, commonly called Sage, is typified in NJ by summer blooming annuals, some of the species and cultivars really begin to shine in autumn, and Salvia leucantha or Mexican Bush Sage is among the best!

Salvia is the largest member of the mint family or Lamiaceae containing close to 1,000 species of shrubs, herbaceous perennials, biennials and annuals found throughout Central and South America, Eastern and Central Asia and the Mediterranean. The genus name was first used in the writings of Pliny the Elder. Born as Gaius Plinius Secundus (23-79AD), he was a Roman general who studied plants and natural environments throughout his military expeditions. The genus stems from the Latin Salvere, meaning to feel healthy. He was most likely discussing the culinary Sage, now known as Salvia officinalis that had long been renowned for its healing and health virtues.

The common name of Sage also originated from the word Salvere, which transitioned to the Old French Sauge, and later to the Middle English Sawge before finally becoming the word we know today! The Swedish botanist, Carl Linnaeus (1707-1778) officially named it Salvia officinalis in 1753. It is also the ‘type’ species for the genus, to which any new or existing species are compared. The species epithet officinalis was a term that Linnaeus originally coined in 1735 and used repeatedly throughout his career. It stems from the Latin officina, which initially meant workshop or place of work. It transitioned to the name of a storage room in monasteries where medicines and medicinal plants were stored. Officinalis means ‘belonging to an officina’ and Linnaeus affixed this epithet time and time again to describe plants or animals that were known to have medicinal benefits.

Salvia flowers come in a multitude of colors, ranging from red to white to various shades of blue and indigo. Often the calyx or leafy bracts at the base of the flower are darker in color as seen above in a flower of Salvia ‘Amistad’, which adds to the ornamental appeal. The size of the flower also varies from ½” to nearly 3” in length. The flowers are also much beloved by pollinators but, what remains hidden from casual observations is the rather unique mechanism for ensuring pollination. The corolla is a combination of all the petals and Salvia petals are divided into a large overarching upper corolla lip and what appears like a pollinator landing pad for a lower lip, as seen in the image above. Both the long thread-like stigma that receives the pollen and the anthers that shed pollen are located within and protected by the arching upper corolla lip. What makes pollination unique is how the anthers became modified over time to ensure pollination. Anthers consist of a slender threadlike filament that is attached to the base of the flower with typically two pollen releasing structures at the apical or tip of the structure called theca. The theca are actually connected to a small horizontal structure called a connective, which in turn is joined to the tip of the filament. 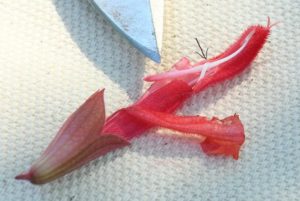 In most plants the connective is so reduced in size that the theca appear to be attached directly to either side of the filament. In Salvia, it is speculated that the anthers became reduced from an initial count of 4 to 2, while the connective became elongated, pushing one theca closer to the tip of the upper calyx lip and the other, nonpollen bearing theca, deeper into the base of the flower. Over time, the lower or basal theca lost their ability to generate pollen and joined together, producing a wishbone shaped structure that pivots on the tips of the two filaments. In the image above of Salvia Embers Wish™, the lower lip of the corolla was cut, exposing the nearly white connectives and filaments that are attached to the lower corolla. The knife tip is pointed to the lower, non-pollen bearing theca. The arrow points to the filaments, upon which the connective pivots. At the very base of the flower are the nectaries that are laden with a sugary liquid, which the pollinators naturally wish to reach when visiting the flower. When the insect or bird enters the flower or pushes in its beak to reach the nectaries, it hits the bottom end of the wishbone structure, allowing the two pollen releasing theca to pivot down upon the back or head of the visiting pollinator. After several days, the anthers finish releasing pollen while the two stigma that are seen protruding out of the front of the flower above, become receptive to pollen and lower, brushing across the back of the visiting pollinator and collecting the pollen deposited from a previous flower. Thus, the sacrifice of the two theca to create this pivoting wishbone structure actually enhanced the chance of pollination rather than diminished. In addition, with the anthers and stigmas ripening at different times, the flower will not ‘self-pollinate’, since crosspollination creates more vigorous offspring. Ingenious!

Although many summer blooming forms of Salvia are still in bloom come October, one of the best species for autumn is Salvia leucantha, commonly called Mexican Bush Sage. It is native to central and eastern areas of Mexico that feature tropical and subtropical weather conditions. In February of 1791 it was named by the Spanish botanist Antonio José Cavanilles (1745-1804), who was one of the first botanists from Spain to appreciate and accept Linnaeus’ concept of genus and species. Leucos is Greek for clear, white or pale, and Anthos is Greek for flower, describing the white flower that is subtended by a velvety purple calyx. As the weather cools, the flower color deepens to a light lavender in color, as seen in the image at right that was photographed in early November. The plants mature to 2-3’ tall and wide, with the arching, 4-6” long flowering racemes beginning to appear in late August and continuing until heavy frost. The 3-4” long leaves are oppositely arranged and much like the calyx, they are also slightly pubescent. Like all the species of Salvia, Mexican Bush Sage prefers full sun and well-drained soils and thanks to the scented foliage, it is also deer resistant. It also makes a superb container plant and is an excellent substitute for Chrysanthemums should you be looking for something different.

The various cultivars and species of Salvia remain a very popular addition to summertime gardens, but gardeners often overlook the late summer and autumn bloomers since they lack flowers when most people are buying plants in May or June. When considering the autumn garden, look to adding this spectacular annual to your garden. Spectacular for adding late-summer through November color to the Garden, for its interesting pollination strategy and for its ease of culture! This is a Salvia that most certainly belongs in your garden! 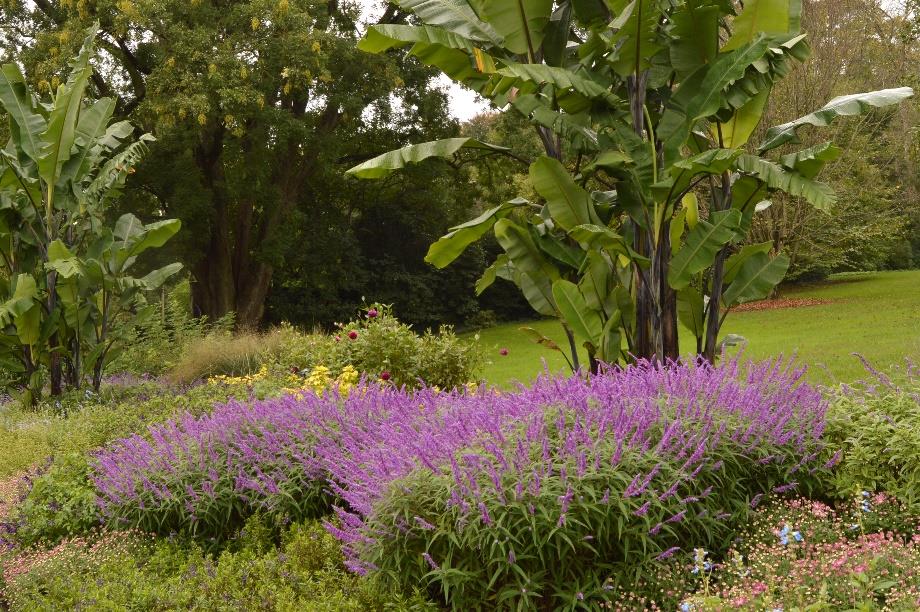