One of the positive developments from the pandemic is the renewed interest in gardening and in particular, growing food. I have always been astonished at how many children do not know how their food is produced, other than it magically appears on grocery store shelves. Obviously, their parents did not share a passion for growing food and hopefully, that will continue to improve once the pandemic is behind us. Some fruits are not only tasty and nutritious, but have an attractive ornamental appeal. For years I have been touting the beauty and benefits of Pawpaw Trees, botanically called Asimina triloba. Perhaps now, this tree’s time has finally arrived!

Pawpaw is a member of the Annonaceae or Custard Apple Family, containing upwards of 108 different genera and 2,400 species that are principally located in tropical and subtropical regions of the world. Asimina triloba is one of 12 species, all native to North America and is the most Northern and cold hardy species of the family, distributed from Georgia north to Ontario and west to Arkansas and Missouri. It typically appears in moist, well-drained areas along shaded streams, forested lowlands and wooded slopes. Pawpaw was initially named Annona triloba in 1753 by the Swedish Botanist Carl Linnaeus (1707-1778). 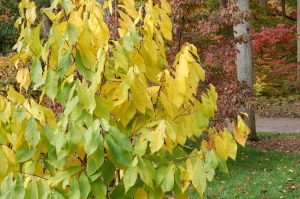 The genus is still in existence with around 166 species and was derived from the Taíno word Anón for fruit. Taíno was the name of the culture of indigenous people in the Caribbean prior to the arrival of the Spanish. The genus name of Asimina was penned by the French Botanist and Naturalist Michel Adamson (1727-1806) in 1763. The word was adopted from Assimin or Rassimin, as the tree was so named by the Native American Algonquian Indians. It was not until 1817 that the French Botanist Michel Felix Dunal (1780-1856) properly described the tree as Asimina triloba, although the tree continued to undergo various renditions until 1886 when it was conclusively decided by the American Botanist,

Asa Gray (1810-1888) that Dunal was correct. The species epithet means 3 lobes and describes the double whorl of 3 petals that comprise the flower (see images below). The common name of Pawpaw is believed to have come from the Spanish Papaya due to the similarity of the fruit shape, size and taste.

Although Pawpaw is hardy to zone 5, its appearance certainly reflects the tropical and subtropical regions inhabited by the remainder of the Custard Apple Family. The oblong foliage is 6-12” long with a pronounced outward and gently drooping display. The leaves are arranged alternately along the stems and come autumn, develop an attractive yellow fall color in shade (picture above), although it can blend with orange when grown in full sun (pictured at left). Asimina is an understory tree, typically growing to 15-20’ in height, although heights of 30’ are not uncommon when conditions are ideal. Although it grows in shaded locations in the wild, it adapts very well to full sun in the home garden, provided it is given a little protection from the afternoon sun for the first year or so. The 1-2” diameter flowers are bell-shaped or campanulate, with the dangling flowers beginning to open along the leafless stems in mid-April. 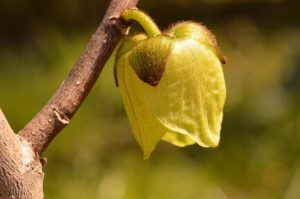 The flower buds open sequentially from the inner reaches outward, which is a great adaption in case of an unexpected late spring frost; the closed flower buds are not impacted by the chill and subsequently continue to open and ultimately bear fruit! The flowers are initially a pale green on opening as pictured above, but gradually change to a deep ‘meaty’ red at maturity. The flowers consist of an outer whorl of 3 lightly pubescent sepals or modified leaves that are also initially green before developing dark red highlights with age. The sepals and flower stem are lightly pubescent and are located at the top of the flowers once open as seen above. The six petals are arranged in two distinct tiers of three, with a larger outer whorl and a puckered inner whorl (as seen at left). 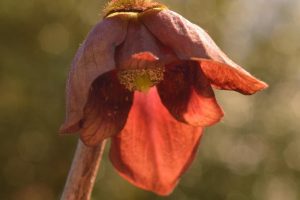 The flowers have a slightly fetid odor, which in combination with the deep red color of the flower provides the clues for which creatures serve as pollinators – namely flies and beetles! Not to worry, I have never seen flies hovering around the trees and there is always good fruit set. It is important to plant several different clonal selections of Pawpaw, since the trees are not self-fertile and require at least two genetically different plants for pollination. The species exhibit what botanist call protogynous dichogamy, whereby the female stigma and the male anthers mature at different times, preventing self-pollination and inbreeding depression. My experience has been pruning the plants into a somewhat planar or two dimensional configuration, combined with removal of the root suckers helps to enhance flowering and fruiting.

Pawpaws produce the largest edible fruit in North America (pictured below), ultimately reaching lengths of 3-6” and weights upwards of 5-16 oz.! When ripe, the fruit changes from green to varying shades of light yellow, with a sweetly aromatic fragrance and a slight softness to the touch. The fruit’s taste also has tropical overtones with accents of mango and pineapple, yet with the texture of ripe banana or custard. The ripe flesh is best eaten with a spoon or made into ice cream, 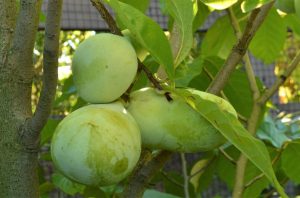 a smoothie or used in baking. Using a spoon is also handy since the fruits have two rows of large dark brown seeds that are challenging to eat around! The fruit has to be picked when ripe since, at least in my experience, they fail to ripen if picked too early. They also have a very short shelf life of only a few days, although the pulp can be frozen for up to a year if properly processed. Aside from sweet tasting, the fruit is also very nutritious, containing healthy amounts of Vitamin C, Magnesium, Iron, Copper and Manganese. They are also a good source of Potassium and antioxidants.

Of course, the plant did not develop these delicious fruits in conjunction with the evolution of Homo sapiens, since fossil records of Asimina date back 23 to 54 million years ago, long before the appearance of our ancestors. It is known that fruit eating Megafauna or mammals over 100 lbs. such as Mastodons, once roamed North America and were responsible for not only consuming the fruit, no doubt in one ill-mannered bite, but spreading the seed and slowly enlarging its native territory. With the loss of many of these animals between 12,000 and 13,000 years ago, the reproduction and distribution of many plants was also impacted. One rather annoying characteristic of Pawpaw is its strong tendency to sucker from the rootstock and create colonies. Although bothersome in the Garden, this trait may have allowed the plant to endure; since there was no longer a vector for seed distribution, the production of new stems allowed a colony to endure as the older trunks failed! As the Native American Indians slowly spread throughout North America, they in turn took over the task of the megafauna in spreading and planting the seed! Another trait that is both beneficial and problematic is the lack of insects or animals that eat the foliage or stems. Rarely is deer browse evident. Initially, this may sound beneficial, but like many members of the Annonaceae Family, Asimina contains acetogenins that function as a neurotoxin. These compounds are most concentrated in leaves, young stems and unripened fruit, which explains the lack of deer browse. It is also present in ripened fruits. Many cultures throughout the tropics create a tea from the leaves of plants from the Annonaceae family, which supposedly acts as a sedative. Over the course of a lifetime, this consumption creates an atypical form of Parkinson’s disease. The point being that one should not overindulge in the fruits either, but rather practice moderation!

Pawpaw is a plant that is entrenched in American culture. According to the writings of Lewis and Clark in September of 1806, Pawpaw fruits sustained their expedition for several days after their supplies dwindled and both George Washington and Thomas Jefferson were great fans and grew trees in their garden. It is certainly not without its faults. However, it is a great plant for people who are exploring fruit and vegetable gardening for the first time or well-seasoned gardeners who are interesting in exploring new food options. Without doubt, it is a delicious and ornamental tree for your garden! 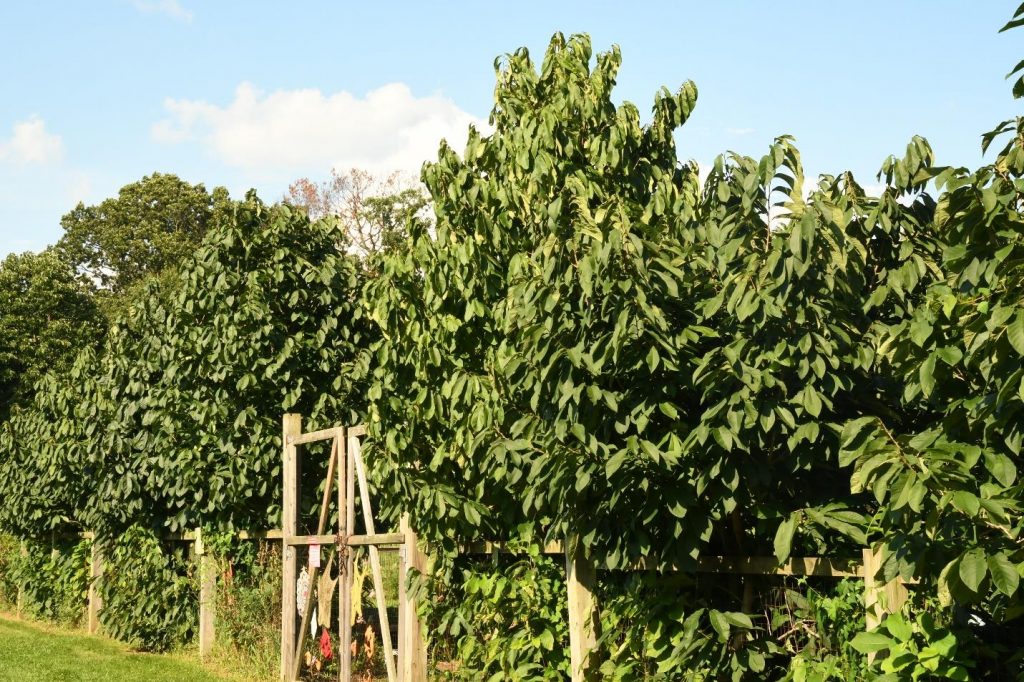