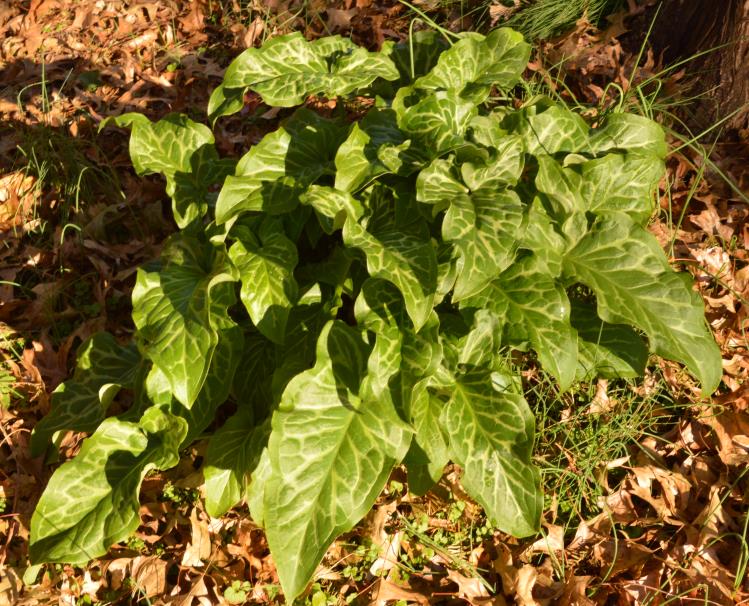 With the chilly temperatures of winter well entrenched in our Gardens, evergreen foliage clearly plays an important role in providing interest at this time of the year. Conifers serve an important role in providing the bones for the garden, but there is still a need for detail plantings as we walk about our walkways and paths. One plant I have enjoyed using over the past 30 years for winter foliage and form, as well as for its ‘hot’ flowers come spring is the Italian Arum, Arum italicum.

Italian Arum is a member of its own family of Araceae – the Arum family – and is native to Southern Europe, Northern Africa and the Middle East. The genus name was crafted in 1753 by the Swedish Botanist Carl Linnaeus (1707-1778) from the Greek word Aron meaning poisonous. Plants within this genus contain calcium oxalates, which when ingested result in the swelling of the throat, tongue and eventually cause difficulty in breathing and even death for children. The species epithet was penned by the English botanist Philip Miller (1691-1771), meaning ‘of Italy’, giving homage to one of its native regions. The subspecies italicum is the most commonly cultivated form as the foliage has very distinctive and attractive white venation (pictured at right in November). 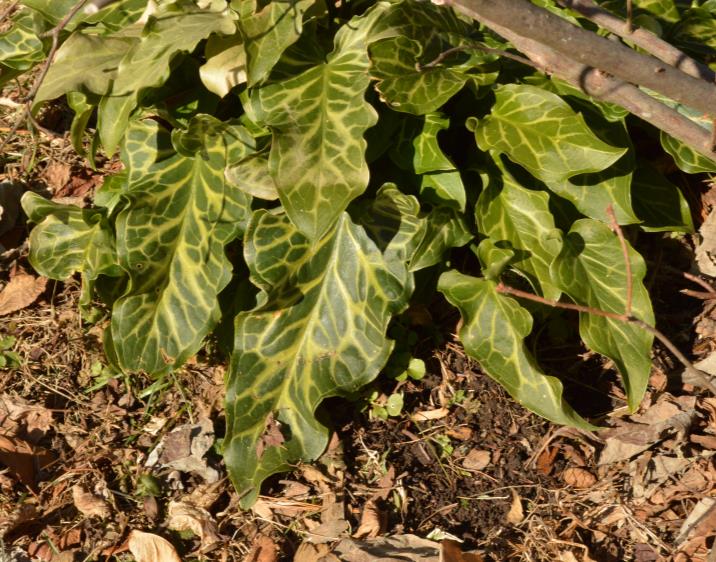 Typical to the genus, Italian Arum grows from a tuber, with the sagittate or arrow-shaped foliage beginning to emerge in late September or early October and typically remaining attractive until the following June (photo at right was taken on February 10th). During severe winters, the foliage can scorch if located in an exposed location, but fret not as it will be refreshed with new foliage come spring. The straight species features glossy, deep green foliage or foliage with white splotches while the previously mentioned subspecies is laced with white venation. The leaves usually grow to 12” tall by 6-8” wide, but can be larger if conditions are ideal. The foliage certainly provides great winter interest, but come spring, it is the flower that makes the plant all the more fascinating!

The flowers appear in May. They consist of a central club-like spadix, appearing in front of and slightly surrounded by a creamy white bract or modified leaf called a spathe. The spathe grows 8-10” tall while the spadix reaches a more demure 4-5” long. The urn-shaped base of the spathe wraps around the lower portion of the spadix and is called the spathe tube. This spathe tube encloses the fertile flowers which appear in whirls, encircling the spadix. The fertile pistillate or female flowers are located at the base of the spadix, with the pollen releasing staminate flowers perched above, with sterile female flowers called pistiloide florets separating the two. Atop the staminate flowers and located near the narrow neck of the urn-like spathe tube are the infertile staminode flowers that produce slightly downward oriented filaments that stretch outwards and nearly touch the neck of the spathe tube. 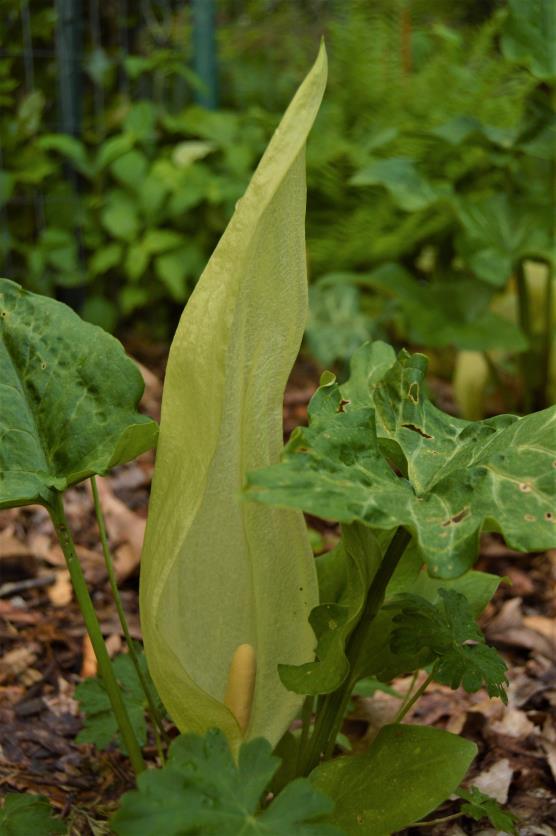 Arum flowers are termed protogynous, whereby the female flowers mature first and are no longer receptive to pollen when the staminate flowers mature and begin to release pollen. This staged maturation prevents the flowers from self-pollinating, resulting in inbreeding depression. To further aid in pollination, the male flowers are thermogenic, whereby they actually go through periods of releasing heat and can become upwards of 50 degrees warmer than the ambient air! Initially, this makes little sense, until one realizes that the flowers are pollinated by flies and the heating of the flowers releases volatile chemicals that smell like rotting meat or even stale urine! None to worry though, since the odors are too faint to be noticed by the passing gardener. Attracted by the odor, small flies are able to push past the filaments of the staminode flowers in search of the source of the odor but, due the slightly downward orientation of the filaments, the flies are not able to escape. The filaments remain resilient against any attempts of escape for around 24 hours, allowing the incarcerated the flies to hopefully deposit pollen from a previously visited flower onto the stigmas. After one day passes, the stigmas become unreceptive to pollen while the staminate flowers begin to shed pollen and the staminode filaments become limp, allowing the pollinators to collect pollen as they move upward and out of the spathe tube. An incredible scenario!

Shortly after the flowers fade the foliage withers, leaving the fruit to develop. The peduncle or stem of the flower proceeds to elongate to 6-12” tall and is topped by an oblong cluster of developing fruit that is covered by a papery tunic. As the tunic dries, it splits open revealing the attractive cluster of red fruits that remain ornamental well into August (pictured below). In the southeastern and northwestern parts of North America, along with Australia, New Zealand and the UK, the dispersal of seeds by birds and even ants have caused this plant to be listed as an invasive, which outcompetes various native plants. I have always kept a watchful eye on this plant in garden settings and although I have seen seedlings produced around the mother plant, it has not proven to be a worrisome self-seeder in NJ. Of course, planting one plant or removing the fruit before it matures will negate any worries about invasiveness and allow the gardener to simply enjoy its winter and early spring beauty. 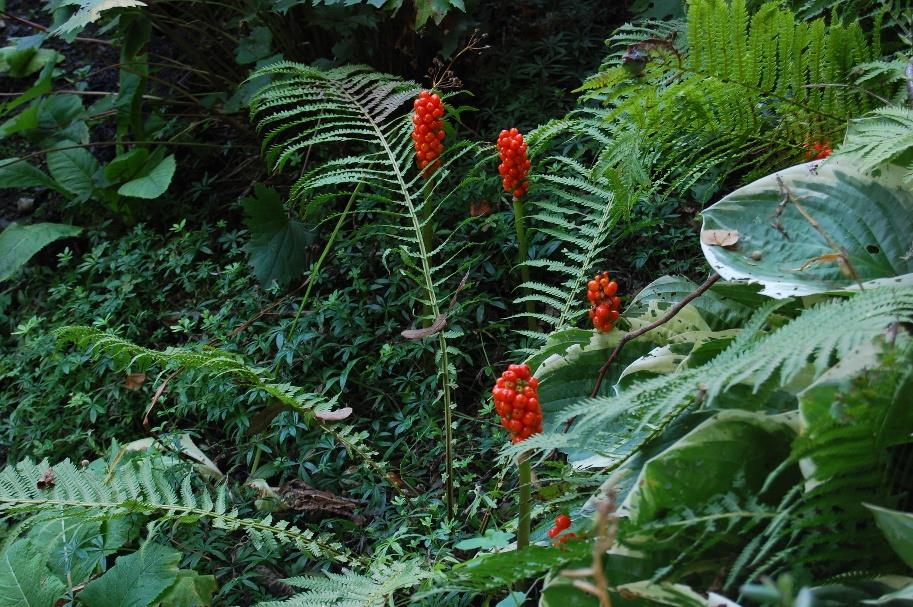 Hardy from zones 5-8, the plants prefer to be located in a humus rich, shaded location where the soil does not become excessively dry throughout the growing season. They can even be located in fairly wet soils, as I witnessed at the Cornell Botanic Gardens where they are planted along a stream. The tubers readily produce offsets during the late fall, allowing an individual plant to gradually increase into a substantial clump with time. It is also interesting to note the tuber produce two types of roots: vertically oriented contractile roots during the early fall that help to pull the tubers ever deeper into the soil, followed by a mat of horizontal roots whose purpose is to absorb nutrients and water.

Available as a container plant or as tubers from bulb companies, Italian Arum is not any easy plant to find; most nurseries do not like to stock container plants since there is nothing to see following June. However, it is an amazing plant for the garden, providing nearly year-round interest with a flower that literally becomes warm to the touch during pollination. Truly one hot plant that needs to grace more mid-winter gardens!