December is undoubtedly best known for the Holidays, family gatherings and festivities that invariably include decorating the homestead with colorful plants. The plant most frequently used of course is the Poinsettia. I like Poinsettias, but for the past few years I have been discussing plants that provide holiday cheer while continuing to improve in size and appearance as the year to come, or better yet the years to come, pass. One group of plants that I have greatly enjoyed as colorful houseplants are species of the genus Peperomia, commonly called Radiator Plants. 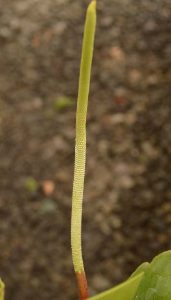 Peperomia is in the family Piperaceae or Pepper family, which derives its common familial name not from peppers we eat as a vegetable, but from Piper nigrum, the source of black pepper! The genus Peperomia consists of nearly 1,000 species, most of which are found throughout tropical regions of South America, although a few are located in Africa, Mexico and the Caribbean. The genus name was penned by the Spanish Botanists Hipólito Ruiz López (1754-1816) and José Antonio Pavón Jiménez (1754-1840) in 1794, following their 3 botanical tours of Peru and Chile during 1777 and 1788. The name Peperomia comes from the Greek Pipéri for pepper and Hómoios for resembling or similar, once again a tribute to its distant cousin Piper nigrum. The common name of Radiator Plant was coined by the famed horticulturist Liberty Hyde Bailey (1858-1954); since the plants enjoy warm air and bright light, much as one would find on a window sill above a radiator, he deemed it apropos! For nearly all species of the genus, the foliage provides the primary ornamental appeal, although the flowers are intriguing. The horizontal rows of small flowers are located along a 2-5” long spike (image at right) that emerges from the apical tip of a stem. They are certainly not stunning, but they do provide a touch of interest. Very little research has been conducted on the flower pollination, but it appears many of the plants produce seed asexually via agamospermy, whereby unfertilized ovules yield viable seeds! 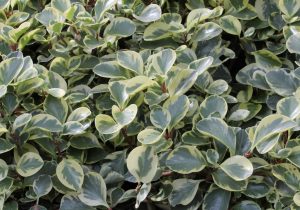 One of the easiest species to grow is Peperomia obtusifolia, commonly called Blunt Leaved Radiator Plant or Baby Rubber Tree. The species epithet comes from the Latin Obtusus for dull or blunt and Folium for leaf, providing the foundation for one of its common names. Originally described by the German botanist Albert Gottfried Dietrich (1795-1856) in 1831, this native of Mexico and the Caribbean has 1-2” glossy round leaves that appear along stout stems. The plant produces a low, almost shrubby habit, growing to 18” tall by 2’ or greater in diameter. The stems are somewhat brittle and care should be exercised when handling. For December, the form ‘Variegata’ sports attractive creamy white and soft green variegation. Interestingly, there are several forms of ‘Variegata’ on the market. Some have a broad, creamy white margin with an irregular, silvery green central splash that nicely compliments the deep red color of the younger stems (as seen on the left). Others have mottled white and green foliage that is somewhat less impactful yet still very attractive. Regardless, these forms provide great colors for the season. 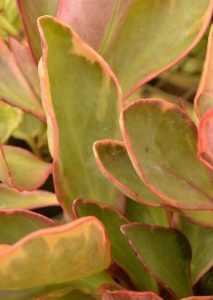 Another easily grown species is Peperomia clusiifolia, the Red-edge Peperomia. Originally named Piper clusiifolia in 1789 by the Dutch Chemist, Doctor and Botanist, Nicolaus Joseph von Jacquin (1727-1817), it was not until 1829 that the British systematic botanist William Jackson Hooker (1785-1865) properly described the plant. Native to the West Indies and Venezuela, the species name describes how the leaves are similar to the tropical genus of woody plants Clusia, which was named after the famed Artois botanist, Carolus Clusius (1526-1609). The plants have thick waxy paddle shaped leaves, growing to 3-4” long with a prominent red margin and red stems. The variety named Tricolor (pictured at right) features foliage splashed with red, white and green, producing a most attractive plant for the home that can be paired very nicely with some Poinsettias! As with the previous species, plants reach upwards of 18” tall and gradually spread to 18-24” around.

The most commonly grown Radiator Plant is Peperomia caperata. The origin of the plant is actually unknown, since the botanist Truman G. Yuncker (1891-1964) described the plant in 1958 from a plant in a private collection. The species name is Latin for wrinkled, which very aptly describes the deeply veined and corrugated foliage. There are a number of dark purple and green foliaged forms, but one of the most handsome for December is ‘Silver Ripple’, with almost reflective, silvery foliage between deep green veins (pictured below).

Most species of Peperomia are epiphytic, dwelling in tree tops where they are exposed to brighter light than on the ground below. They grow on decaying branches or composting leaf litter trapped amongst the base of branches. As a result, they prefer well-drained potting soils that are rich in humus and kept on the drier sides, especially during the winter months. In fact, Peperomia caperata develops decay if the crown remains wet and benefits from the pot being placed in a container of water, allowing the water to be absorbed from the base, keeping the crown dry. P. clusiifolia and P. obtusifolia are much less fussy, although they too benefit from the soil being kept drier during the winter when active growth slows. All species prefer warm temperatures and should be kept away from cool drafty windows where the ambient temperatures could dip below 55°F. Although not a necessity, increasing the humidity does benefit the plants. If space allows, setting the pots on top of gravel in a shallow dish flooded with water will increase the humidity. Also, just because the plants are listed a ‘houseplants’, it does not preclude them from being used outdoors come the summer – a mistake made by many a gardener! In late May, place the plants outside in a lightly shaded area, where our humid warm summers will encourage lush growth.

Peperomia will certainly not replace Poinsettia for its seasonal color. However, Peperomia does provide a colorful and enduring plant that will only increase in beauty with the passing of the years. Happy Holidays to all! 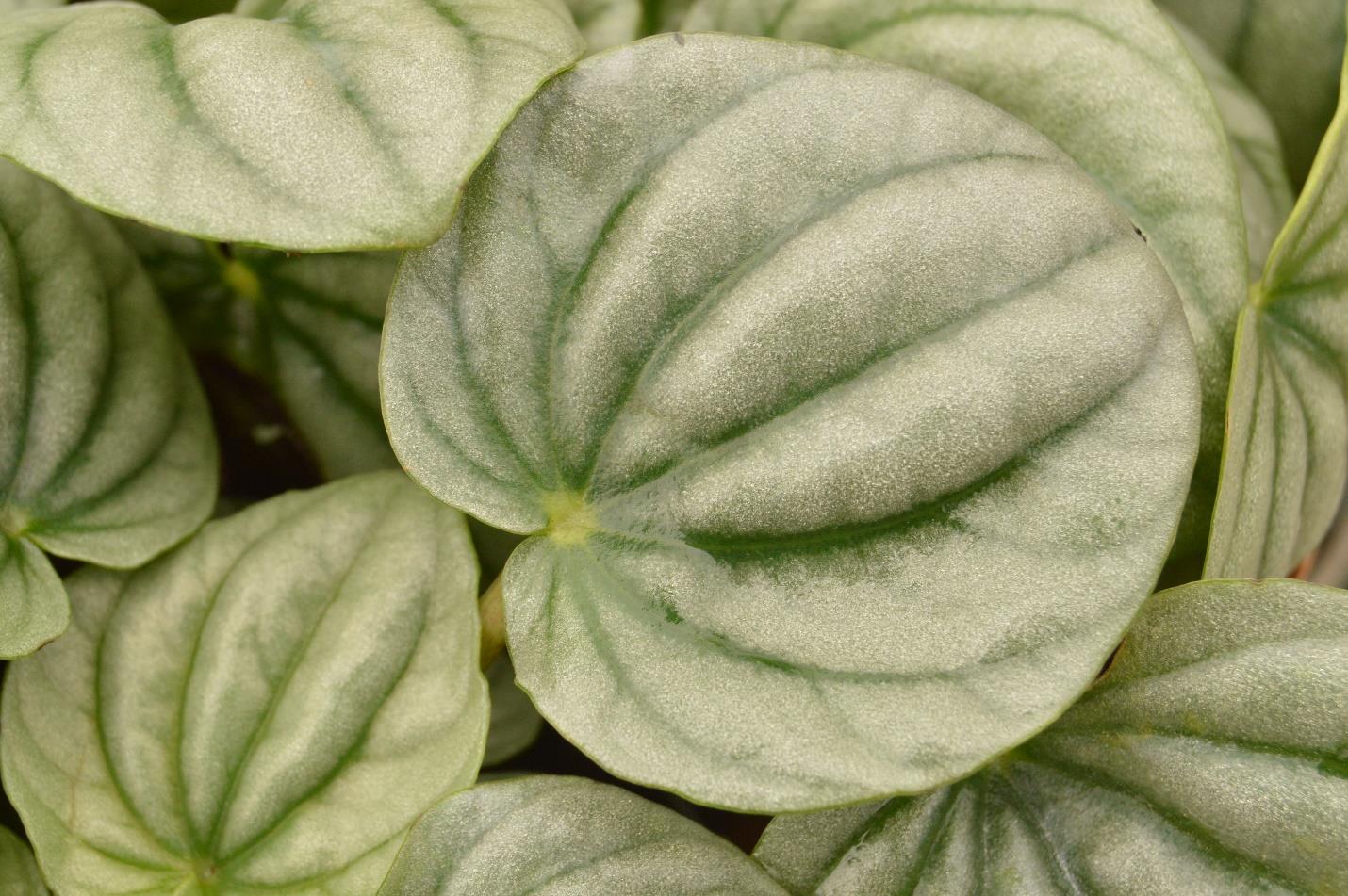