I am often accused of using descriptive adjectives more typically reserved for people when discussing plants. Terms like handsome, attractive and elegant frequently roll of my tongue, along with far less complimentary terms on occasion. On the other hand, terms like eloquent, ethereal and graceful are words I typically do not use to describe a plant. However, I do believe they are the perfect adjectives to describe the Fringe Tree, botanically named Chionanthus virginicus, especially while it is covered with its fleecy white flowers of spring.

Fringe Tree is a member of the Oleaceae or Olive Family. The genus includes nearly 150 species, almost all of which are evergreen and native to tropical regions of the world. Chionanthus virginicus is native from NJ south to Florida and West to Oklahoma and Texas. The genus name was originally penned by the Swedish Botanist Carl Linnaeus in 1753; inspired by the snowy white flowers, he crafted the genus from the Greek Chion for snow and Anthos for flower. Linnaeus also provided the species epithet and described the plant in 1753. The species name refers to the colony of Virginia, which in 1753 not only included the current state of Virginia, but also the regions now known as Kentucky, Indiana, Illinois and portions of Ohio and Western Pennsylvania.

In general, Chionanthus virginicus is slow growing, appearing naturally in moist woodlands along stream banks and in exposed rocky glades. It frequently appears as a multi-stemmed shrub, reaching 15-20 feet tall and slightly wider, as pictured at right in the Morris Arboretum. However, under perfect conditions, they can reach heights of 30 feet by equal or greater widths. Depending upon the year and location, the white flowers that inspired the name can appear in late April, although May into early June is more typical for NJ. The floral display lasts for upwards of 2 weeks and looking up into a canopy of the pendant flowers can be a very transformative moment for the gardener! The flowers emerge from buds at the base of the leaves or leaf axils and freely dangle along the stems. The flowers are arranged in panicles, which have a central stem with three-flowered clusters radiating outwards along this stem. The overall panicle ranges from 4-10 inches long and up to 6 inches wide. The plants are dioecious, with individual plants having all male or all female flowers, a trait certain species adopted to prevent self-pollination and inbreeding depression. The individual flowers consist of 4-6 strap-like lobes or petals that are up to 1 inch long on the female and slightly longer on the male flowers, by 1/16” wide (as pictured at right). 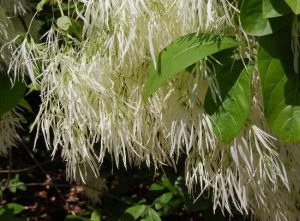 The flowers are wonderfully fragrant and give the plant a very appealing lacy or fringe-like appearance that gave rise to its common name. In some regions the plant is also called Old Man’s Beard, since the dangling panicles resemble a frothy white beard! The male flowers have 2 stamens that aid in making the flowers appear showier, while the female flowers have a single central stigma. Although the male flowers may be showier, it is the female flowers that develop clusters of blue to purple fruits come September. The fruits are technically called a drupe, with each containing a single large central seed. The drupes are much beloved by birds and are a good reason for not planting a clonal mass of simply the showier male selections. The fruits are equally vital to the garden, if not more so, for their attractive display and provisions provided for wildlife (pictured below in late November). 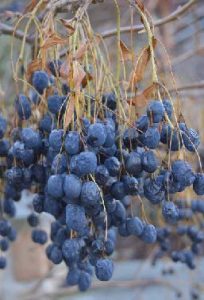 The foliage appears with the flowers and is positioned such that it nicely compliments rather than hides the blossoms. The leaves are a dark, glossy green, measuring 4-6 inches long by 2 inches wide and transform to an attractive golden yellow come fall, especially if the plant is located in full sun (pictured below at the end of the article). The bark is a smooth gray on young stems, maturing to a ridge and furrowed or occasionally a warty appearance on older specimens.

The other commercially available and hardy species for North American gardens is Chionanthus retusus, the Chinese Fringe Tree. Native to China, Korea and Japan, it too grows as a multi-stemmed large shrub, reaching 10-20 feet tall and wide. It can also appear as a single stemmed small tree, whereby it can reach heights of 30 feet tall. Individual plants are often genetically oriented to their ultimate form, although training will have some impact on whether they assume a shrub or tree habit. Chionanthus retusus was originally brought to Europe in 1845 by the Scottish botanist and plant hunter Robert Fortune (1812-1880) with a second specimen appearing prior to 1860 from the English botanist and plant collector Charles Maries (1851-1902). The species epithet is from the Latin Retundere, meaning to pound back or blunt. A retuse leaf has a rounded apical tip with a v-shaped notch, which describes the foliage of many plants with their rounded, glossy green leaves that are up to 4 inches long and 3 inches wide. Interestingly, some plants have elliptical foliage that comes to a point. The leaves also have a thick almost leather-like texture. The plant was named and described in 1852 by two individuals: the English botanist and orchid enthusiast John Lindley (1799-1865) and the English Gardener and Architect Joseph Paxton (1803-1865). The foliage is much more frost tolerant than its North American cousin, with the foliage remaining green through a number of heavy November frosts. During most autumns in the north, the foliage drops while still green in late November, but in more southern gardens the foliage will change to a buttery yellow.

Chionanthus retusus also has dioecious flowers. The flowers differ from their North American cousin by being erect and produced from the apical buds at the tips of the branches. Although the panicles are smaller, only reaching 2-3 inches long and as wide, the petals are wider, reaching from ⅛ to nearly ¼ inch wide (as seen below). The wider petals combined with the apical positioning of the flowers provides for a more dense and brilliant floral display (pictured at left), which is attractive yet not quite as ethereal as its cousin in my opinion. 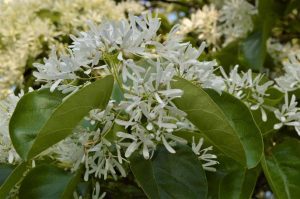 The bark is showier on this species, as the younger stems are cinnamon brown in color with small waves of peeling bark running the length of the stems. Over time, the bark matures to a dark brown and gradually becomes ridge and furrowed.

If space is restricted and a more columnar form is needed, consider Chionanthus retusus ‘Tokyo Tower’ (pictured below). It slowly matures to 20’ tall by 8’ wide. The plant pictured below was planted 12 years prior to the picture being taken, when it measured a more humble 4-5’ in height! The form is decided upright and once again it yields an attractive floral display. The plant is female and produces an attractive fruit set in the fall, providing a male plant is within a pollinators reach. 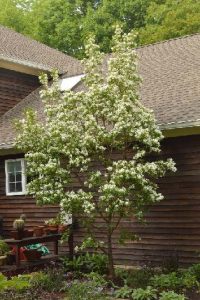 Both species of Fringe Tree perform admirably in full sun or light shade and are very adaptable to a broad range of soil types and pH. I have seen large specimens of Chionanthus retusus planted near busy roadways where they are subject to significant amounts of road salt throughout the winter without any noticeable impact. The American Fringe tree is hardy to zone 3 and while the Chinese Fringe Tree is only hardy to zone 5, they are both suitable for NJ gardens. The one issue to consider and keep an ever watchful eye out for is Emerald Ash Borer, as both species are susceptible.

Eloquent and graceful, Chionanthus is certainly a plant that has been overlooked too long in the gardening world. It is very easy to grow and, providing you have chosen seedling diversity, you will not only have an attractive spring floral display, but a late autumn display of fruits complimented by our foraging winged friends. What more could a gardener ask?