Let’s face it, November is not a month best noted for flowers. The spectacular fall colors of various trees and shrubs abound, but for the pollinators, there are scant few flowers left to visit. Even most of our native plants have succumbed to the autumn frosts. However, over the past few years, I have noticed one plant that has sustained both blooms and pollinators well into November – Aster tataricus, commonly known as the Tatarian Aster. 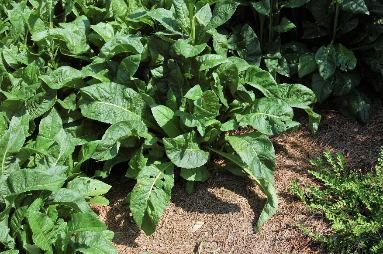 Aster tataricus is native to the cold regions of Siberia, Northern China, Mongolia, Korea and Japan, where it is native to moist meadows and wetlands. It is a member of the Asteraceae or Sunflower family, which contains close to 32,000 species. Carl Linnaeus (1707-1778) first penned the genus name in 1753 from the Greek Astēr for star, referring to the star-like form of the flowers. Linnaeus established Aster amellus, the European Michaelmas Daisy as the type flower to which all the other plants for this genus are referenced. Initially home to an enormous number of species, the genus was reduced to around 180 species found throughout Eurasia, based on more recent and improved understanding of the genetics. Carolus Linnaeus the Younger (1741-1783), continuing in his father’s footsteps, published this species in 1781 in his book Supplementum Plantarum. The species epithet tataricus comes from Tartay, an archaic name for the geographic region that extended from the Caspian Sea and Ural Mountains east to the Pacific Ocean, including the areas to which this plant is native. 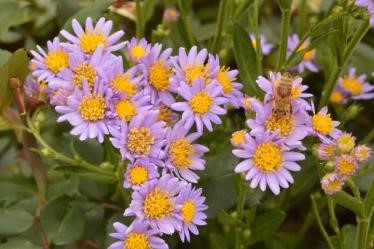 Aster tataricus is a robust plant, to say the least. The coarse, paddle-like shape of the foliage always reminding me of Horseradish with the basal green leaves reaching 16-24” long and up to 6” wide (pictured above). The plants are rhizomatous in nature and can spread over a fairly substantial area of the garden, providing a rather pleasing yet coarse groundcover. In late August to mid-September, the flowering stems elongate, reaching an impressive height of 5-8’ before blooming! The stems are hispid or clothed with straight bristly hairs along with more modestly sized leaves of 3-4” in length and 1” wide. The top of the flower stem branches freely, producing abundant flower buds that open from late September through early November. The flowers (pictured at right) typically have between 12-18 lavender-blue to blue ray florets that resemble petals, surrounding a center of yellow disc florets, creating a beautiful display.

The Aster’s stems are very sturdy and unless the plants have been excessively fertilized, they do not need staking. Although the traditional thought would be to place the plant at the back of the border due to the height, the plants also look great when worked in among grasses such as Calamagrostis x acutiflora ‘Karl Foerster’ (Feather Reed Grass) that typically matures to 5’ tall (pictured at left). 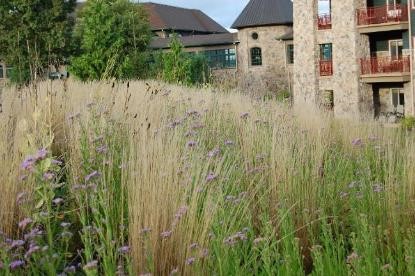 The blue flowers peaking above the grassy foliage, providing a very natural appearance similar to their native meadows. The flowers also have great symbolism. Hanakotoba is the ancient Japanese art of assigning a meaning to a flower, which in turn allows a person to communicate with others without any spoken words. ‘Flower talk’ so to speak! Aster tataricus expresses remembrance, a tribute I suspect due to its late blooming nature! 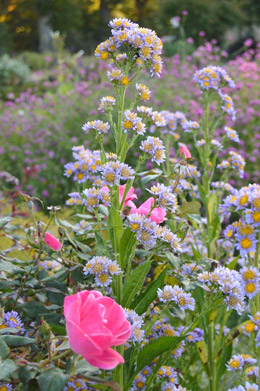 If the species form is a bit too tall, the selection named ‘Jindai’ grows to a more controlled height of 3-4’ tall. Rick Darke of Longwood Gardens and Sylvester ‘Skip’ March of the U.S. National Arboretum discovered this selection at the Jindai Botanic Gardens in Tokyo Japan during 1985. Although shorter in height, they are still spreading in nature and need to be watched to ensure they do not grow beyond their bounds by removing unwanted rhizomes early in spring. I have also found this habit to be a benefit, since the plants will spread into neighboring shrubs and create some attractive combinations. In one instance, as pictured at right, the Aster has spread amongst a Bonica® Shrub Rose and the sky blue flower of the Aster looks great growing amongst the soft pink flowers of the Rose! It has also spread into a Salix alba ‘Britzensis’, commonly known as Coral Bark Willow that is coppiced or pruned back to 8-10” annually. The stems of the Willow develop a light red coloration by mid-October, providing a nice backdrop for flowers. Another pleasant combination is with Amsonia hubrictii, the Blue Star Amsonia; the yellow fall color of the Amsonia pairs beautifully with the central yellow disc flowers of the Aster, as seen in the image below. So many combinations!

Both the cultivar ‘Jindai’ and the straight species produce copious amounts of nectar late into the season and are beneficial to a number of pollinators, including bees, beetles, moths and wasps. The plants are best grown in full sun in moist to average garden soil. As I have discovered, they do require more acidic soils and fail to perform well in soils with a high pH. Other than occasionally rogueing out some rhizomes that have ventured too far afield, Aster tataricus is very low in maintenance and truly is one of the ‘Flowering Stars’ in the November Garden. 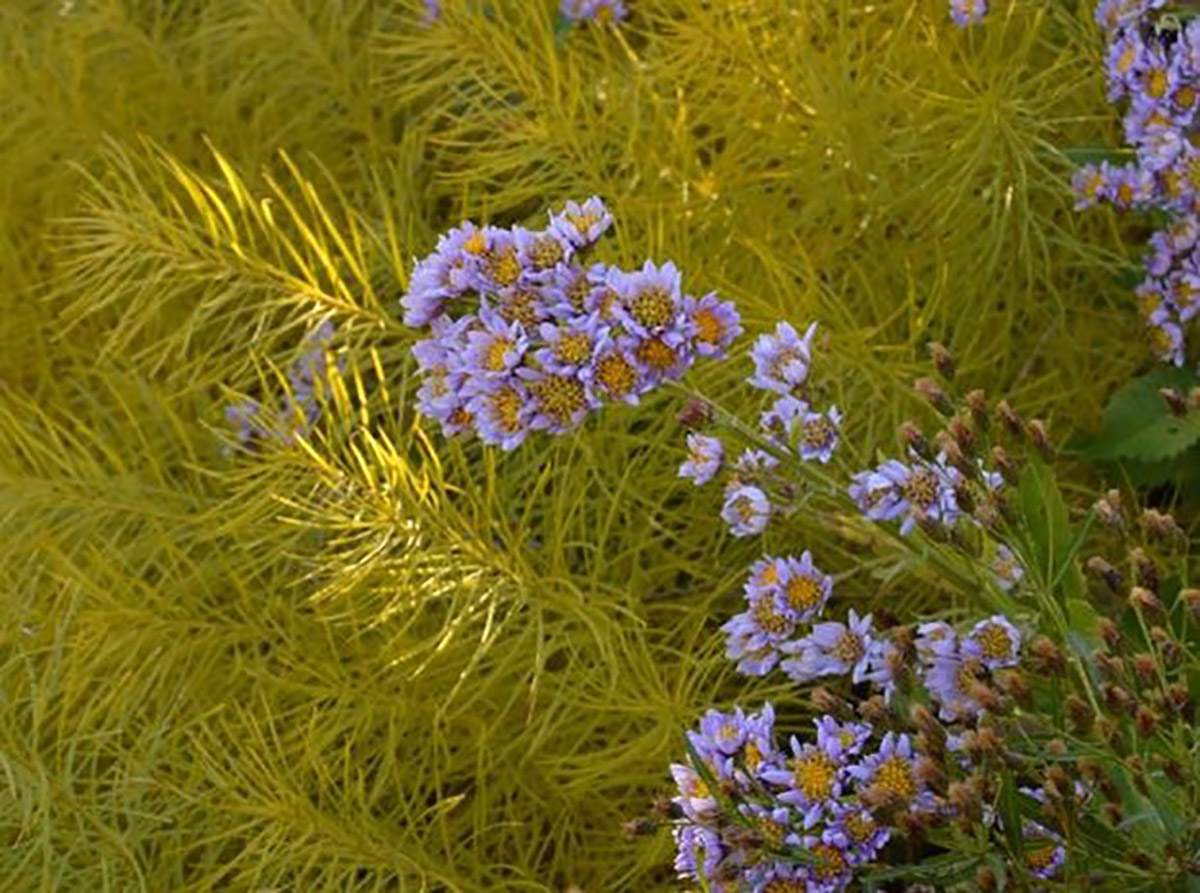